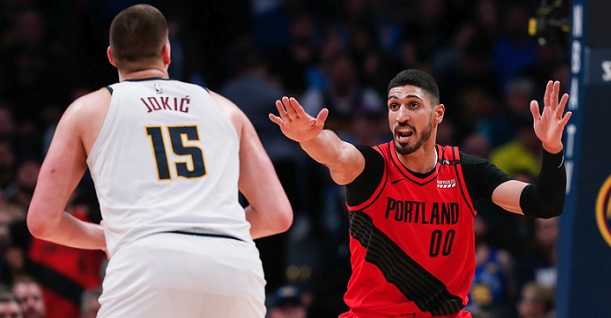 The Denver Nuggets will host the Portland Trailblazers on Tuesday night in Game 5 of this Western Conference semifinal series.

The Nuggets (2nd seed) pulled off a crucial road in win in Game 4 in Portland, tying the series at 2-2 and getting back home court advantage. Now Denver has 2 of the last 3 games at home, where they are one of the strongest teams in the league, so they will feel good about themselves. The Nuggets will attempt to ride the momentul from Game 4 and get a foothold on this series tonight in Game 5.

The Blazers (3rd seed) have definitely missed Lilard`s production in these first 4 games against the Nuggets. After having a monumental series against OKC, Lillard has not found his groove against the Nuggets, shooting just 37% from the field and 28.6% from three. If this countinues, Portland`s chances to win even another game in this series don`t look that great.

Team news: There are no new injuries for either team. The Blazers continue to miss their starting center, Nurkic, who has been out since before the playoffs.

A fair case can be made that the Blazers are lucky to have escaped the first 4 games with a tie. They got a seven point win in Game 2 in Denver when the Nuggets simply could not hit a shot – it was a completely off night for the Nuggets, a historically bad shooting night, rather than the Blazers outplaying them. And then the Blazers won Game 3 by three points in four overtimes (!!!) – a coin toss, really.

The Nuggets are a better team overall than the Blazers, especially with Nurkic out. They have more firepower and their main man Jokic has a huge matchup advantage in the frontcourt against the defensively challenged Kanter. As such, Jokic is ballin’, while Portland’s superstar, Lillard, has been shut down so far by the Nuggets.

The Nuggets also have the momentum now after Game 4, and it feels like they are beginning to be the dominant team in the series. They played great in the last two games in Portland, and could have won both of them – but they will be satisfied even with the win they got, which switched home court advantage back to them.

As such, the Nuggets can now make use of their biggest edge, their home court advantage, which is arguably the most important one in the NBA given the particular high altitude in Denver.

I don`t see Portland winning another game in Denver. The win they got here earlier in this series came due to a historically horrible shooting night from the Nuggets (34% from the field and 20% from three), something which surely one can`t expect to happen again.

My tip will be the Nuggets to win straight up. Games in this series have all been decided by single digits, so I won`t risk the handicap considering that the price for the simple win is very playable. Prediction: Denver Nuggets – Portland Trailblazers 114 – 100.