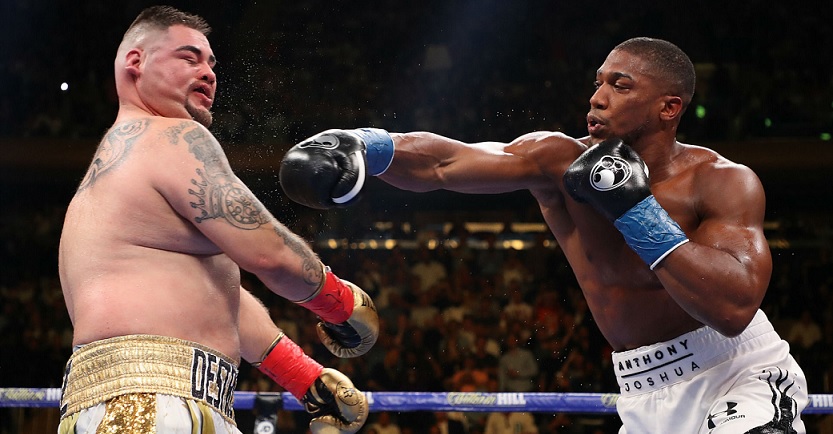 The highly anticipated rematch between Andy Ruiz Jr and Anthony Joshua will take place in Saudi Arabia on Saturday night, with the WBA, WBO, IBF and IBO Heavyweight titles on the line.

Andy Ruiz Jr. (33-1-0, 22 KO) sprung the big upset back in June by knocking out Joshua in a slugfest, and taking the 4 belts from the undefeated champion. Ruiz has always been a good boxer and he came into that match with just one loss on his resume, which was against Joseph Parker in 2016, and it was a controversial decision. But even so nobody expected him to take care of Joshua, especially not in such a spectacular fashion. The fight was evenly matched until the 7th round TKO, but Ruiz managed to drop Joshua 4 times (being knocked down himself). Ruiz was a 25-1 underdog in that fight!

Anthony Joshua (22-1-0, 21 KO) has been considered the best heavyweight in the world since his win over Wladimir Klitschko back in 2017, although that is not something I agree with, not with Deontay Wilder and Tyson Fury in the same division. Still, he has been the big name in the Hhavyweights, but now faces a legacy fight. A second loss to Andy Ruiz would certainly derail his career in a big way. He will look to be more focused and avoid the mistakes he made back in June.

Joshua is 10 cm taller and his reach is wider by 20 centimeters. Ruiz is 20 kilograms heavyer. Surprisingly, Ruiz put on almost 7 kgs more compared to the first fight, while Joshua is weighing 4.5 kgs less.

Ruiz coming in so heavy is not a good look for him. As hall of fame coach Teddy Atlas said, it can`t help his speed. And his speed was a key factor in the first fight. Meanwhile, Joshua looks fitter than ever, and losing some weight will help him.

Anthony Joshua really didn`t look right in the first fight. There were a lot of rumors about personal problems and he clearly underestimated Andy Ruiz, and that was obvious from the gameplan. Joshua could have easily used his reach to keep Ruiz at bay and dance around him. Instead he allowed it to become a slugfest, which is exactly what his opponent wanted.

It`s hard to see Joshua making the same mistake twice. He`ll surely take Ruiz seriously now. He`s fitter, and his sparring partners have insisted that he is as ready as he could be.

It would be direspectful to say that Ruiz is not focused for the fight, of course he is, but over these past few months he had a place in the spotlight he never thought he would have. His bank account has fattened. The weight he put on is worrying, and it won`t help him.

The Mexican is a solid heavyweight, but Joshua is the better boxer here. He`ll surely be more cautious and pragmatic this time around, and try to set himself up better to use his devastating power.

My tip will be Joshua to win, I`d say an 11th round knockout if I had to choose a method of victory, or maybe Joshua to win by decision, even more likely. Joshua has odds around 1.40 to win this rematch straight up, compared to something like 1.02 in the first fight, so I like the price.