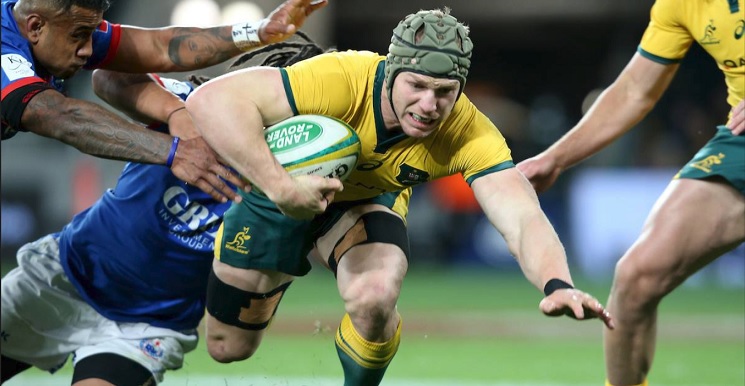 Australia and Georgia will play their last match in Pool D of the Rugby World Cup on Friday.

The Wallabies are virtually sure to finish second in the group, and can rest some players in this clash, but even so they will field a pretty strong lineup. Australia’s performance so far in the World Cup has been so and so, as moments of great rugby have alternated with dry spells. Australia defeated Fiji 39-21, lost 25-29 to Wales and in their previous match got past Uruguay 45-10.

After finishing third in their 2015 World Cup group, the Georgians will fail to repeat the same performance this time around – unless they somehow get a shock win over the Wallabies. Georgia did claim a big, dominant 33-7 win over Uruguay so far, doing a sound job in the one match they were expected to win. But they couldn`t keep up with the better sides, losing 14-43 to Wales and 10-45 to Fiji.

Australia will field a mix lineup here, which still looks solid – as they don`t have to rest all their key guys after already giving many of them a breather against Uruguay.

Georgia will make only two changes to the lineup which lost against Fiji last week, which opens the door for potential fatigue.

Georgia’s progress has been undeniable in the last few years, but it`s pretty clear that they are still not ready to challenge the big boys.

In fact, Georgia has proved to be pretty much useless in matches against Tier 1 nations, and particularly in matches against teams with a strong running game. They have been completely exposed in the last 4 years by such sides like Argentina, Scotland or even Italy, and most recently Fiji – which mopped the floor with the Georgians last week in a 45-10 destruction. Georgia’s clear weakness in the backs department is hurting them against teams which prefer to open the field and run with the ball – and Australia is (or at least can be when needed) one of those teams.

The game against Fiji has raised another problem for Georgia. The team looked completely exhausted in the later stages of that game, and that is not good news for them coming into this match. Tier 2 teams always have problems sustaining their best level of play for an entire World Cup, given that they don`t have the best depth and are not used to play multiple matches in such a short period of time, against top tier opposition.

If Georgia was already tired against Fiji, chances are they will struggle physically in this clash against the Wallabies, especially with just two alterations being made to their previous lineup.

Australia hasn`t played magnificent rugby so far and will rest a number of key players, but they are still a couple of levels above Georgia, and the starting XV still looks pretty strong.

With Georgia always struggling to contain teams which rely on a running game, look for Australia to push those buttons, as they are more than capable of doing. This doesn`t look like a good matchup for Georgia.

The handicap line is set at a rather accessible value of 26.5 points, presumably after the favorites failed to cover the big spreads in the first part of the World Cup.

The two times they lost by less than 27 points were both in 2017. First against Argentina, when they came back from a 30 point deficit in the last 10 minutes. Then against a Welsh “B” side which played a physical game, which favored Georgia.

It has to be said that weather could well be rainy and humid on Friday, which the Georgians will hope to help them make the game physical and force more handling errors from Australia. On the other hand, it could drain the energy from Georgia’s already tired legs even faster.

Taking everything into account, one has to feel that Australia to cover is the bet to take in this clash – and if Georgia will indeed collapse physically, it could get ugly. Prediction: Australia – Georgia 45 – 7.