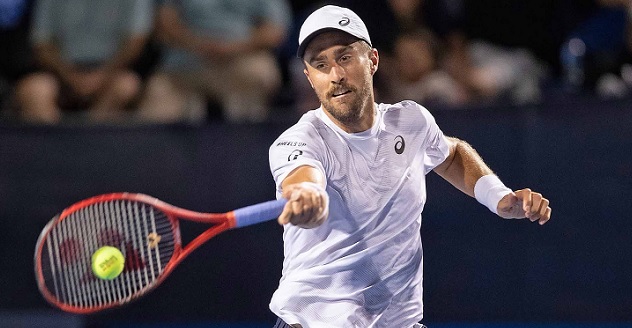 Caspeer Ruud and Steve Johnson will meet in the Winston Salem third round on Wednesday.

Ruud, who had a bye in Round One, defeated Lloyd Harris in the second round, but it wasn`t much of a win – as Harris retired after losing the first set 1-6. As such, Ruud reached the Round 16 despite barely playing any tennis. The Dane has been in pretty good form lately, reaching the semifinals on clay at Kitzbuhel and qualifying for the main draw last week at Cincinnati in his first hard court tournament this summer (def. Klahn and Delbonis, lost to Pella).

Johnson had a really poor year by his standards, with a 17-19 win-loss record at all levels, many first round losses, and nothing better than two quarterfinals at ATP level (both before June). However, the American really looks to be finally hitting his strides these days. Two weeks ago he decided to try the challenger tour and that was a good decision, as he got his rhythm back and won the Aptos tournament in dominant fashion, without losing a set. He seems to have translated that form to Winston Salem, as Johnson blew past Moutet (6-3 6-3) and Evans (6-3 6-1) this week. In fact, due to rain delays, both matches took place Tuesday.

The two players never met before on tour. A matchup analysis won`t tell us much, but Johnson is favored by the surface. He`s a hard court player, while Rudd, while a capable hard courter, remains a clay court player. Johnson is also at home in the US, where he often performs well. Actually, he was a finalist last year at this tournament, where he also reached another semifinal and another quarterfinal.

Ruud is having a good year and is coming into this match in pretty good form, but facing an in form Johnson on hard courts will be difficult for him.

Ruud can play good tennis on the surface but he`s not the same player he is on clay. We saw that last week in Cincinnati where, despite showing a good level of play, he struggled to beat Klahn and Delbonis (not exactly the most dangerous / in form opponents) before losing a tight two setter against Pella. He is yet to win a full match on the main draw of an ATP hard court tournament this season.

Johnson really played some great tennis this week, cruising past Moutet and demolishing Evans, two very capable opponents. In fact, Johnson was actually the underdog against Evans, but still left the Brit only 4 games – although it`s fair to say Evans seemed disinterested and was not playing well.

Playing the 3rd match in two days may be why the bookies opened up with so high odds on Johnson, but the American only played four quick sets of tennis on Tuesday, lasting a total of less then 2 hours and 20 minutes. That`s an average Grand Slam match, or maybe even less than that. Johnson should be fine on Wednesday as well.

My tip is Johnson to continue his excellent form and take care of Ruud here. He`s happy to be getting his rhythm back, has points to defend from his final last year, and is very motivated to perform well in this pre – US Open tournament (where not everybody is giving their all). I would not be surprised at all if odds drop below 1.60 until match time. Prediction: Casper Ruud – Steve Johnson 6-7 4-6.