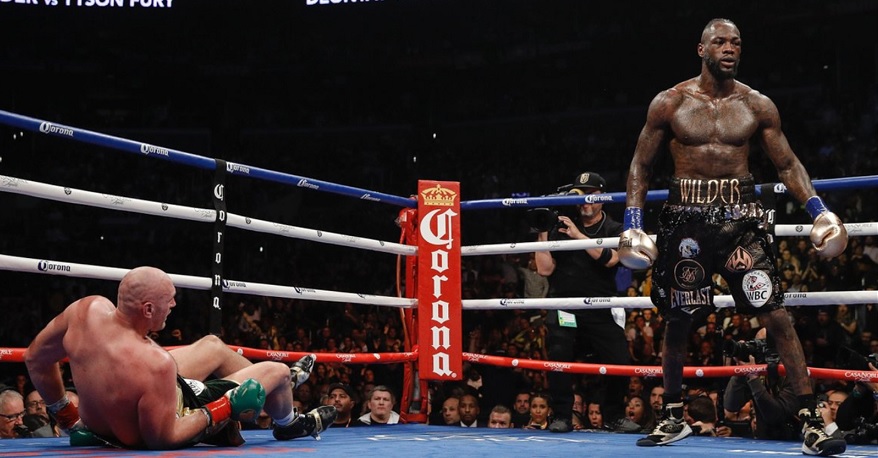 Deontay Wilder will put his WBC Heavyweight title on the line against Tyson Fury on Saturday night at the MGM Grand Garden Arena in Las Vegas. The highly anticipated rematch will take place 14 months after the two champions battled for a draw in December 2018, a decision which was a little bit controversial, with many fans and experts agreeing that Fury should have been given the decision – an opinion which I personally hold as well.

Deontay Wilder (42-0-1, 41 KO), arguably the most powerful puncher in boxing history, had two fights since his draw with Fury back in December. The Bronze Bomber got past Dominic Breazeale via a first round knockout, and then claimed another KO win over a strong Luis Ortiz in November last year. Wilder arguably lost all of the first 6 rounds in that fight, but trusted his dynamite right hand and eventually rocked Ortiz in Round 7 for a spectacular KO.

Tyson Fury (29-0-1, 20 KO) has been pretty busy lately, being involved in a lot of activities, including signing a contract with WWE Wrestling. Since the previous meeting with Wilder he had two fights, but against lesser opposition than Wilder faced. The Gypsy King made light work of Tom Schwarz for a second round TKO last Summer, but had real problems against Otto Wallin in September. Fury was unimpressive and a huge cut above his eye seemed like it would stop the fight, but eventually the champ earned a deserved unanimous decision.

The first bout between these two was truly one of the finest ones heavyweight boxing saw in the last couple of decades. Fury completely outboxed Wilder and that should have probably earned him the decision, but Deontay Wilder’s two knockdowns got him close enough to earn a controversial draw. The 12th round knockdown was particularly shocking, as Fury seemed to be down and out after a devastating combination by Wilder, but somehow found the heart to come back from the dead.

There’s no secret about how this rematch is going to go down style wise. Fury will dance around Wilder and use his vastly superior technique to win most rounds. There’s virtually no chance of Wilder outboxing the Gipsy King.

Wilder on the other hand will try to be patient and wait for the perfect opportunity to land his devastating right hand and earn his 42nd knockout win in 44 fights.

It really all comes down to whether Fury will be able to avoid getting caught by Wilder, it’s that simple. But it seems to me that’s a risk we should be willing to take when we basically know for sure that the Bronze Bomber can only win via a knockout. You can’t go against Fury when you almost have the guarantee that he will outbox Wilder and win most rounds.

We have to go with the better boxer here, and that’s Tyson Fury. He really is one of the most skilled heavyweights to ever live, and in the first fight he showed the ability to get up from the canvas even when getting floored by Wilder’s power.

There could be a few reasons of concern for Fury.

His involvement in the WWE, showboating, giving interviews left and right and changing trainers might not have been beneficial, and even seemed a little suspect – hopefully he’s not back on drugs. But he did go through an extremely serious training camp for this rematch, and he is clearly in better shape than he was in the first fight, when he was fresh off ditching drugs and losing a ton of weight. Now he has more training and more fights under his belt.

There’s also the ugly cut he suffered above his right eye in the September fight with Wallin, and that could be in danger of being reopened if Wilder targets it.

Again, for me, the above are risks which are worth taking when we are looking at the odds for this fight, and when we take into account how much more skilled (and how much bigger) Fury is compared to his opponent.

Fury should have been the winner in the first fight and he shouldn’t be the underdog in the rematch, but the general public loves a big puncher and pushed Wilder’s odds down. Great price on the Gipsy King to win this, and I will go with 9 units on the Brit to end up the winner. If I had to pick a way of victory, I’d say Fury by unanimous decision.