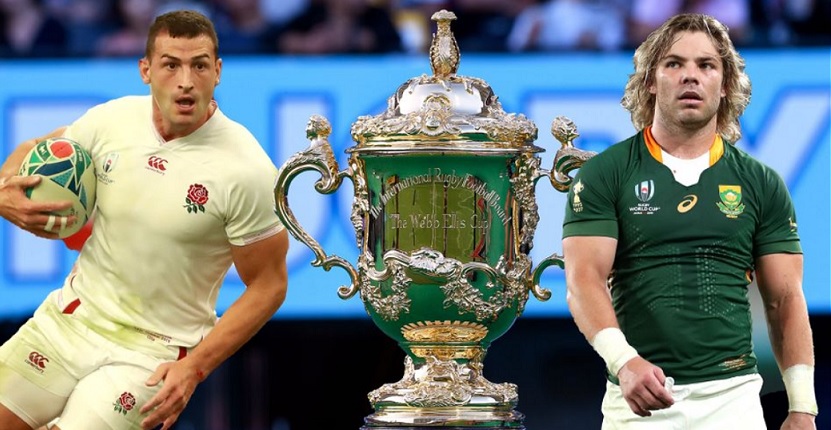 England and South Africa will meet on Saturday in the 2019 Rugby World Cup final, at the International Stadium in Yokohama.

What a performance for England in the semifinals! The Red Rose entered the matchup with New Zealand on a high, after demolishing Australia in the quarters, but few expected them to knock out the mighty All Blacks – and surely nobody expected them to do it in such a dominant manner. England had its foot on New Zealand’s neck from start to finish, playing terrific rugby, rarely letting the All Blacks escape their own half. England put on one of the best performances in World Cup history for a 19-7 win which, honestly, should have been much larger.

South Africa wasn`t the most spectacular team in this World Cup, and their road to the final wasn`t necessarily the most remarkable. The Springboks lost in the group stage against New Zealand, had a favorable draw to meet Japan in the quarterfinals, and played a nail biter in the semifinals against Wales, edging a 19-16 win in a very tight game. But the Boks have been very solid and pragmatic overall, and their defense has been an absolute rock, probably the best in the entire tournament – just 55 points allowed in six games, that`s an average of 9,16 points conceded per game.

There are no new injuries for either side. England will field the same lineup which subdued the All Blacks, which is not surprising. The South Africans will be boosted by the return of key man Cheslin Kolbe, and he will be the only change made to their semifinal starting XV.

There have been 5 H2H meetings since the previous World Cup, with England winning three of them, including the last two. The previous meeting was last Autumn, when England escaped with a 12-11 win at Twickenham. The styles of play of these two sides aren`t that different, so there`s no particular matchup advantage here.

Listen, England was absolutely magnificent against New Zealand, and a repeat of that performance would almost surely earn them the Webb Ellis Cup. But playing at the same cosmic level for a second game in a row is rather unlikely, after all they are only human. And this will be a different matchup. Plus, it will be one hell of a task for the Red Rose to recover mentally from such a performance, though being in the World Cup final will help.

The English backs are more versatile and more dangerous than the South African backs, but the Springboks should have the edge in the scrum. And often such matches are won by the forwards and the scrum. But in both departments, the difference is rather slim. A fair case can be made that the Boks have a better bench.

The Red Rose will likely be the team trying to attack and create more, but South Africa`s defense has been flawless in this tournament, and it will not be easy at all to break them down. That will frustrate England and might cause them to start making mistakes. If the Boks keep their discipline and avoid handing over penalties, they will be in a good position.

Weather is expected to be dry at game time, but it might be windy. Hard to say if a team has a better chance of benefiting from that than the other.

It`s understandable why England is pretty much a public bet after what we saw from them in the semifinals. At first glance it looks like this will be the second ever triumph for a European team at the Rugby World Cup, after the same England did it in 2003. But the Springboks will pose a different challenge, and it`s unreasonable to expect the English to perform in the same brilliant manner like they did against New Zealand. This should be a close game, probably a lot of kicking, and chances are it will be decided by slim margins.

Without a doubt, odds are influenced by what happened in the semis, so there`s value on South Africa here. England already started with a lower price than normal in a game between two equally talented teams, and now that price has been pushed even lower by the public.

My main tip will be South Africa to cover the +5,5 point handicap. But South Africa to win straight up, with low stakes, also appeals to me, for value alone if not for anything else – so I will also take that as a sidebet. This should be a 50-50 game, maybe with a tiny edge for the Europeans. Prediction: England – South Africa 18 – 19.