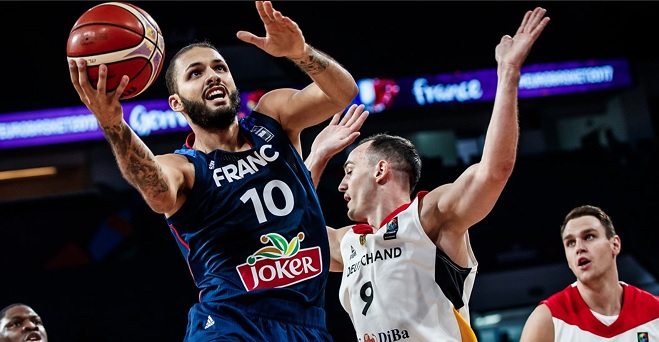 France and Germany will meet in the opening round of the 2019 FIBA Basketball World Cup, with the match counting for the Preliminary Group G.

The two teams have been drawn alongside Jordan and the Dominican Republic, so both are expected to advance. But today`s preliminary group result will be carried over into the main groups, so victory here is already crucial for both sides if they plan on advancing to the KO round later in the tournament.

France has brought a very strong side to China. Even though for various reasons they still miss some players which could have helped them (I`m thinking fringe NBA guys like Noah, Doumbouya, Mahinmi), and Tony Parker retired, the main stars are all here, and the team looks in great shape. There are four starting caliber NBA players in the starting 5 (Ntlikina, Fournier, Batum, Gobert), and they have one of the best players in the Euroleague coming off the bench (De Colo) to give them a lift. The team is young, athletic and skilled, Gobert is probably the third best player in this tournament, so the French have every reason to shoot for a medal.

Germany is a different team compared to the past two decades, when it was Dirk Nowitzki carrying a bunch of lower level players by himself. The Germans are coming to China with three NBA players in their ranks (Schroder, Kleber, Theis) and have a reasonably deep roster with some solid complementary players from the leagues in Germany and Spain. They won’t have Pleiss (Anadolu Efes) or Bonga (Was Wizards) for various reasons.

Both teams looked pretty good in the pre World Cup Friendlies. France won 5 out of 7, while Germany won 6 out of 7, but France met much stronger opposition. Of course, these friendly game results can only have relevance in the sense that they show neither team is having particular chemistry issues, or things of that nature.

Germany will be a tough nut to crack in this tournament, but you have to feel that France is simply much more talented and better overall here.

The French also seem to match up perfectly against this Germany side, at least on paper.

The Germans will rely a whole lot on their point guard Schroder from OKC Thunder, and on their big men. Well, France has a defensive specialist at PG to stop Schroder (Ntlikina). And France has Rudy Gobert, the third best player in this tournament, who will surely give Germany’s big men fits. Theis, Voigtmann or Kleber can`t possibly be as effective as they need to be against the two time reigning NBA Defensive Player of the Year and arguably the best rim protector in recent NBA history.

Look for Germany to struggle scoring in the paint (which will happen to all teams against Gobert), so they`ll probably have to rely on hit or miss jumpshots. On the other hand, France has a boatload of offensive options and they are more athletic, so they should get much more easy shots around the rim.

Germany did beat France in Eurobasket 2017, but that was a struggling French team without the likes of Gobert, Batum or Ntilikina.

France should win this. They have the talent, the athleticism, and the matchup seems favorable. With Gobert protecting the rim, they also emanate a feeling of consistency and security.

The -6 point spread is tempting, but I`d rather start my World Cup with a more secure (on paper) bet, so I`m backing France to win straight up. The odds are good enough for me. If they seem too low for you, feel free to ignore the bet, or put it in a combo. Prediction: France – Germany 78- 70.