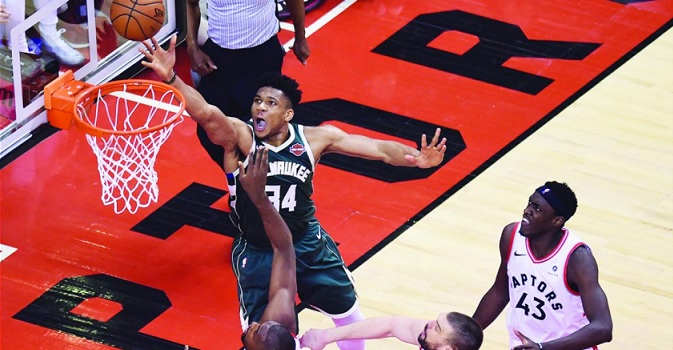 The Milwaukee Bucks will host the Toronto Raptors on Saturday night in the NBA, a chance for Milwaukee to get revenge after losing against Toronto in the Eastern Conference Finals last year – although this is a different Raptors side, with Kawhi Leonard having left in the Summer.

The Bucks (3-2, 1-1 home) are rated as the favorites to reach the NBA Finals from the Eeast this year, and for good reason, Although they lost Mirotic and Brogdon, the Bucks added some nice pieces and look good value to get out of a weak conference. Milwaukee started the season pretty well, navigating through a difficult schedule to claim a 3-2 record, including a win in Houston and a blowout against the Magic last night in Orlando.

The Raptors (4-1, 1-1 away), reigning NBA Champions, lost their main man and Finals MVP Kawhi Leaonard this Summer, so their expectations lowered considerably. However, they still have a good roster and good chemistry, and should still be a good playoff team in the East. Toronto is 4-1 so far, winning three in a row, although it`s fair to say that their schedule hasn`t been the toughest.

Team news & injury report: The Bucks will be at full strength for this game. The Raptors will only miss McCaw, who is not such an important piece.

Listen, the Raptors have played well so far, and confirmed they are still at least a fringe contender in the East. However, it has to be said that they didn`t really beat anybody of note. They had an easy schedule, meeting the Pelicans, the Celtics, the Bulls, the Magic and the Griffin-less Pistons, also playing three times at home. Anything else other than their current 4-1 record would have been an underachievement.

It`s not like the Raptors have been playing lights out basketball, and for all their good chemistry, they do not have that guy to put them over the top. They`re trying to make Siakam that guy, but he`s not it yet, and against Giannis he could very well struggle.

The Bucks are without a doubt the better team here, they have the best player on the court by miles, and you have to feel that at home they should really take care of the Raptors.

One problem for the Bucks is that they are on a back to back, after playing in Orlando last night, but there are a number of factors which heavily diminish this potential issue. First of all it`s a home game, it`s only the beginning of the season, and the Bucks also had the chance to rest their starters in the 4th quarter last night due to blowing out the Magic. Nobody played big minutes. Not lastly, they will be eager to avenge last year’s Conference Finals loss, so this will be a big game for them.

Without the back to back factor the Bucks would have probably been 6,5 point favorites in this one. Now, the line stands at 4,5 points. But there are so many arguments against the back to back being a real issue.

Expect full focus from the Bucks (which maybe wasn`t the case in all their games so far) in a playoff – like atmosphere, and they should certainly be able to win this game in Milwaukee. Toronto is a scrappy team and could make it close, so I will avoid the point spread, but Milwaukee to win straight up seems like a solid bet at very competitive odds.