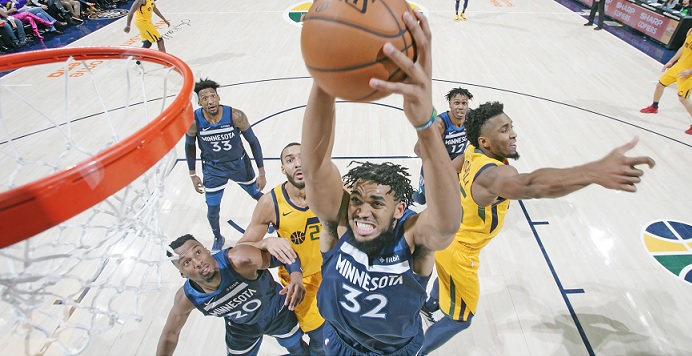 The Minnesota Timberwolves and the Utah Jazz will square off for the second time in three nights on Wednesday, this time with the Wolves as hosts after they sprung an upset on the road in Utah on Monday.

The Wolves (8-6, 3-4 home) are quietly having a surprisingly good season so far. A decent team the Wolves were not expected to challenge for the playoffs, but they will be in with a chance if their good form continues. Karl Anthony Towns has been excellent, and Andrew Wiggins finally seems to have developed in to the star player he was supposed to become. Unfortunately for the Wolves they might have to play without Wiggins for a fourth straight game tonight – but even without their second best player, they managed to win in Utah on Monday.

The Jazz (8-5, 2-4 away), will definitely be contenders in the west after adding Bogdanovic and Conley in the Summer. So far the team has been good, although there is clear room for improvement – which will surely come once the team gains more chemistry. After a four game winning streak, the Jazz not lost two in a row, and those were ugly losses as well, in games they should have won (Grizzlies, Wolves). Look for Utah to be highly focused for a bounce back win tonight.

Team news & injury report: Wiggins, Okogie and Layman are all doubtful for the Wolves, and you would expect at least one or two to sit out, especially seems Wiggins seems rather unlikely to play. Napier is out. As for the Jazz, they have a full squad available except for backup center Ed Davis.

The Wolves won by 10 in Utah on Monday, but in all honesty this will probably be a more difficult game for them.

Utah really had one of those miserable nights in which nothing goes in. They shot 36% from the field as a team, while star man Donovan Mitchell was 5 for 23. Even with these dreadful percentages, they still had a lead in the 4th quarter, but eventually the shooting slump was just too much to overcome. Barring the shooting, Utah seemed like the better team, being able to outrebound the Wolves and get to the free throw line more often.

After two bad games it`s highly likely that the Jazz will improve here, and they will be the favorites to win even if the Wolves have a full roster. But if Wiggins, Okogie and / or Layman sit out, things will get even tougher for the Wolves. Particularly Wiggins, of course.

I`m going to trust the better team to bounce back after a couple of poor performances, so my tip will be the Jazz to win. Look for Utah to get some of its shooting touch back, and that should be enough even if Wiggins ends up playing. If he does we will lose value in the odds, but I`d still fancy the Jazz for the “W”. Prediction: MIN Timberwolves – UTA Jazz 110 – 117.