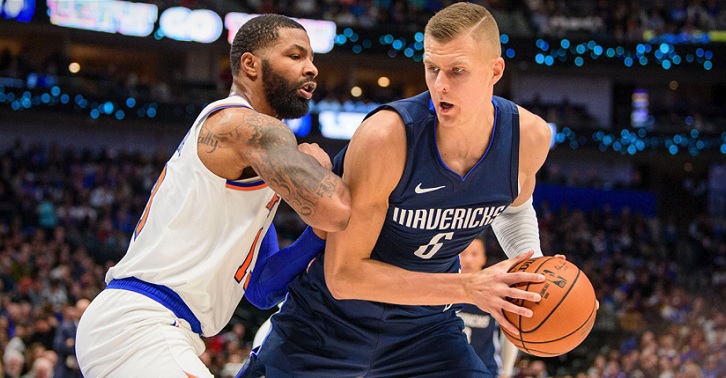 The New York Knicks will take on the Dallas Mavericks on Thursday night in the NBA, with the return of Kristaps Porzingis to Madison Square Garden being the highlight of the night.

The Knicks (2-9, 1-3 home) are going through another miserable year, which was expected by everybody aside from, apparently, their General Manager. Steve Mills came out a few days ago saying that the team is underperforming and measures must be taken, which was extremely strange and gave another blow to the morale of everybody associated with the team. NY is riding a two game losing streak, but one of their wins this season came in an upset of the Mavericks in Dallas.

The Mavs (6-4 4-1 away) are looking great value to make the playoffs this season with Luka Doncic playing at an MVP level in just his second year, and with Kristaps Porzingis back from injury. The Mavericks had a couple of unexpected hiccups, particularly that home loss to the Knicks last week, but they have generally played very well. They have two All Star players and a very deep bench. Last time out they lost a good game in Boston to the Celtics a few nights ago.

Team news & injury report: Bullock, Allen and Payton remain out for the Knicks, while Robinson is questionable. The Mavs have a fully healthy roster for this game.

This game will be all about Porzingis coming back to New York. He`ll likely be in for a bad reception given that he partially forced his move out of the Garden last year, but it will also be another reminder for Knicks fans about the horrid state of their management.

Last week on Saturday, when the two teams met in Dallas, teammates looked for KP, and he had a big night with 28 points.

Now, with the game in New York, Porzingis will be even more eager to show the Knicks what they lost, and teammates are likely to look for him even more than Saturday.

Also, Porzingis is on the back of a miserable night, as he shot just 1 for 11 and only scored 4 points in Dallas’ last game against Boston. As such, you would think he is due a big game.

This is basically a repeat of Saturday’s situation when Dallas hosted New York (Porzingis was coming after a bad game in that one too), and there`s no reason to expect a different outcome as far as the Latvian is concerned. This time he is even more likely to get a higher than usual amount of shots, since it`s his first return to the Garden since the trade.

It must be said that Porzingis is averaging 18.3 points per game this season, and surpassed today`s points total in 4 of the 9 games he played.