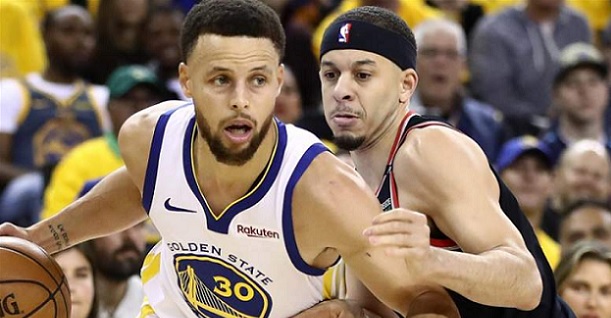 The Portland Trailblazers will attempt to finally get on the board in the Western Conference Finals, as they will host the Golden State Warriors on Saturday night trailing 0-2 in the series.

The Blazers (3rd seed) had a golden opportunity in Game 2, after previously being blown out by the Warriors in Game 1. The Blazers led for most of that Game 2, at one time by 17 points, and it looked like they could get back home with an excellent 1-1 split on the road. However, they were outplayed by the experienced Warriors in crunch time and eventually lost by three points. A huge blow to their hopes and morale, no doubt.

The Warriors (top seed) continue to steamroll through the playoffs without Kevin Durant. Since he went down in Game 5 against the Rockets in the semifinals, the Warriors have not lost a game, and barely lost any meaningful quarter. Indeed, Thursday`s Game 2 against the Blazers was their biggest recent test, and they looked bad in the first half – but responded brilliantly in a manner in which only champions do.

While Golden State`s comeback in Game 2 was another testament of how good this team is without Durant, and how much better they are than the Blazers (who played excellent and quite honestly can`t play much better), in the end the Warriors did fail to cover the spread.

However, the numbers I have been bringing up religiously over the past week remain.

The Warriors are 32-4 since Durant joined them in games in which Durant doesn`t play, but Curry does. They are 30-1 in the last 31 games in that situation, and they are also 5-0 in the playoffs. They have covered the spread in about 70% of these matches (aproximating from memory, but it`s in the ballpark, it`s not just a stat thrown out there).

The Warriors have kept proving they are worth betting on when Durant doesn`t play, given that they are just as good without him (barring certain matchups), while the bookies and the public rate them much lower.

After the Warriors failed to cover the spread in Game 2 I was thinking I won`t bet on them in Game 3, as there`s a good chance they will lose one of these next 2 games on the road. But I was thinking the Warriors would be slight favorites to win. Instead, they are underrated again without Durant, and are 3 point underdogs.

I`m going to keep riding the Warriors train when KD is missing, so my tip here will be Golden State to cover the +3 (asian) handicap. I`m looking for a relatively close game in which Golden State`s championship DNA will prevail again, unless Curry & Thompson will get cold and / or Lillard & McCollum will get crazy hot. I definitely find value in this bet and if the Warriors fail here, there`s a good chance we would at least get our money back by betting on them to win Game 4. Prediction: Portland Trailblazers – Golden State Warriors 107 – 111.