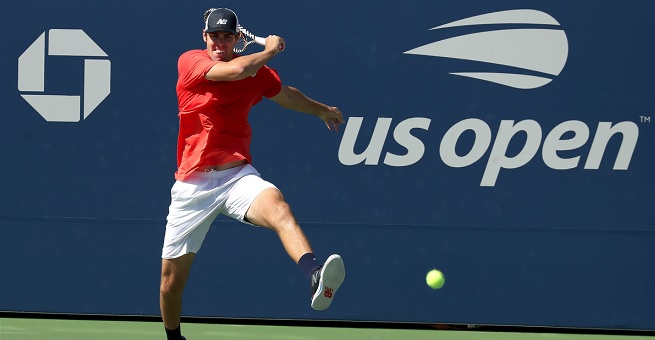 Local favorite Reilly Opelka will take on qualifier Dominik Koepfer in Day 3 of the US Open on Wednesday, in a match counting for the second round.

Opelka had a breakthrough year in 2019 which included a title early in the season at the New York Open, and he has been pretty solid in the last few weeks on the American hard courts. The big serving American reached the semifinals in Atlanta (beat Isner, lost to eventual winner De Minaur in a tight three setter) and the second round in Washington and Cincinnati. In both of those second round exits he played well, losing competitive matches to solid, in form players like Auger Aliassime and De Minaur, while beating the likes of Coric and Eubanks. In the first round here at the US Open, Opelka defeated Fabio Fognini in four sets, playing very good tennis.

The 118th ranked Koepfer has been a journeyman for much of his career, but raised his profile this year particularly by winning the strong Ilkley challenger on grass a couple of months ago. Koepfer came into the US Open in good form, having reached the final at the Aptos challenger earlier in the month. Here at Flushing Meadows he is having one of the best weeks of his career, passing qualifications (def R. Harrison, Mahut, Uchiyama) and getting past Munar 3-1 in the first round.

Opelka leads the H2H 3-0 (all meetings on hard courts), losing just one set out of seven against Koepfer. All meetings took place in the last 11 months, the last one being this year in February, with Opelka winning 2-1 at the Dallas challenger. Both these guys are natural hard court players, so the surface should not favor any one of them. Opelka will have the crowd on his side, but it won`t be much of a crowd on court 17. Still, playing at home will be an advantage, as Reilly is the kind of player who always performs best on his home hard courts.

Listen, Koepfer has been in good form recently, and he deserves praise for reaching the second round at a Grand Slam. In form players are always dangerous, but if we look how Koepfer’s good form has been translated into this US Open, we see it`s not that impressive.

He demolished a disastrous Ryan Harrison in the first qualifying round, then struggled against Mahut, and then defeated Uchiyama rather easily. In the first round on the main draw he played a 6-4 7-6 5-7 7-5 marathon with Munar, an out of form player and a non factor on hard courts. That says a lot about how much Koepfer’s good form means against an ATP level opponent. Struggling so hard against Munar at the US Open is not a good sign for the German.

Koepfer is also 0-3 H2H against Opelka and his game is not well suited against big servers.

An in form, confident Opelka should have no issues getting past Koepfer here. The American is playing well and he’s surely excited about his US Open chances after dominating Fognini in the opening round. His big and consistent serve will, likely, eventually wear down Koepfer.