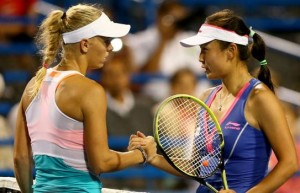 Shuai Peng was simply deadly in these two weeks, not only winning all matches in straight sets but actually never giving her opponents more than 4 games in a set. She beat Radwanska and Safarova along the way and played an effective, smart-offensive brand of tennis. Her shots are going in, she is making few unforced errors (just 7 with Bencic) but the most impressive fact is that she has not lost her serve in the last 36 service games, which is unbelievable for women`s tennis.

Wozniaki backed up her 3 set win over Maria Sharapova with a flawless display against Errani in the quarterfinals, winning 6-0 6-1. Indeed, Errani was nowhere to be found on the court and she probably does not have the quality to play at this level on hard courts, but Caroline did what she had to do: few mistakes, very solid baseline tennis and a little more offense than usual as well. Wozniaki will play her 4th US Open semifinal, but it will be the first GS semifinal in 3 years for her.

Wozniaki leads the H2H 3-1, including winning the last 5 meetings. However, on hard courts it`s just 3-1 and Caroline`s last win came via a Peng retirement when the Chinese player was leading. With Peng playing the best tennis in her life, I feel the H2H analysis is not to relevant here. The matchup analysis is simple: Peng will play her attacking game with strong serving, Caroline will try to frustrate here with her good returns, good defense and good movement.

I can see Wozniaki winning this – she has more experience at this leve and her defensive game is made to frustrate offensive players. However, Peng is playing at an excellent level right now, no doubt she is playing better tennis than Wozniacki and she will put up a fight. I can see the Chinese dominating in multiple streches in this match because she`s just unstoppable right now, but eventually Caroline`s consistent, defensive play will wear out Peng and the Dane will get the win. I reckon the best bet here is Peng to cover the 1,5 set handicap. Game handicaps can be tricky in women`s tennis, the over has lower odds and I do not trust Wozniacki enough to bet on her to win 2-1. So, all in all, my tip is Peng +1,5 set handicap. Prediction: Shuai Peng – Caroline Wozniacki 6-3 6-7 2-6.