European competitions qualifiers are always warmly welcomed by punters and are a great warm-up before the start of the big football leagues. If approached wisely, this summer action can be a great bankroll builder for the football season ahead. With the Champions League and Europa league qualifiers reaching the 2nd round, we take a look at some stats, facts and tips that bettors should keep in mind in order to be successful betting on the preliminaries.

The qualification rounds are viewed by many as being the most upset-filled football competition, but the reality is that a huge percentage of favorites win their games and their ties, sometimes by a big margin. This comes from difference in quality, but also from the motivation that mediocre teams have of doing well in Europe, thus not underestimating the minnows and completing the job. Also, teams from countries like San Marino, Andorra, Northern Ireland, Wales or Estonia simply don`t have the quality to compete regardless of the opponent`s struggles, and they can`t win a tie to save their lives. Of course upsets happen, but really, betting on favorites in the UEFA Champions League and Europa League qualifiers is more profitable than doing the same in most football leagues and for sure better than doing the same in the main stages of European Competitions, where upsets DO happen often. The thing is that many punters are filling a betting slip with 10-15 events at very low odds, and of course one will lose – thus the “upsets” legend in the qualies.

The Under/Over is kept in high regard by punters and is an important part of football betting, so we ‘masterminded’ a statistic for you in this department, including the last 15 years. 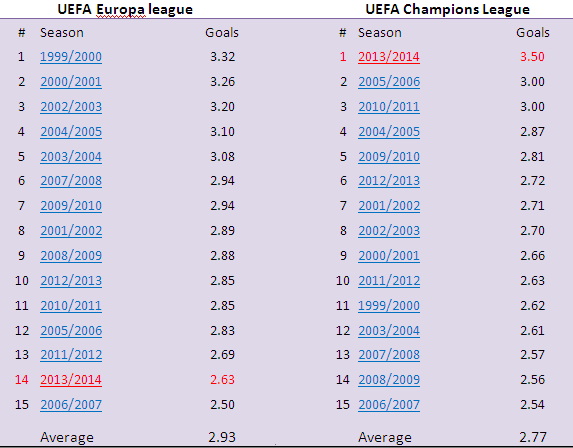 As seen in the above table, the goal average is high in the qualies, especially in the Europa League (current season is highlighted in red). We can also see two very interesting trends here: while in Champions League the goals per game average has increased in recent years, in the EL it has dramatically decreased, with all the last 4 seasons being under the average. We can conclude that the new playoff format in the CL has helped the chances of high-scoring matches, while the transition from UEFA Cup to Europa League has decreased the possibility of goals. While traditionally being more rich in goal-scoring, the second european competition is now seeing less goals than the Champions League.

Match-fixing is a common phenomena in the european qualifiers, but the reality is that if you don`t have inside info, the best you can do is avoid the “usual suspects” (see below in betting tips). You can`t and musn`t skip betting on preliminaries just because of suspicions that can or can not be well-founded, but it`s something one must be aware of.

The qualifiers are a great opportunity to make profit, as their are not so unpredictable as they may seem, but one must keep himself prepared, as there is usually not much information available for these low rated football games. Some punters miss the chance to build their bankroll here and instead end up losing money, and that`s because of the usually low amount of info available, combined with the urge to bet many events and to place high stakes after the season break. You need to make sure you gain every piece of information that you can, manage your stakes and your choices based on accurate insight, knowledge and stats and you can be in for a great betting summer. Hey, maybe we`ll have some great football stories too, as a bonus, as they don`t happen only in high-profile football events.