Why you should back Roma to win the Scudetto

May 11th 2014, Roma – Juventus, second to last round in the Serie A. 73.000 electric AS Roma fans are lighting up the Stadio Olimpico and are going insane as Francesco Totti is being presented onto the field. Roma celebrates it`s first Serie A Scudetto title in 13 years.

Is this a trip to the future or more of a Science Fiction scenario? Unibet is offering odds 3.50 for Roma to win the title and I think the price is definitely worth an investment that could make a punter very happy in 7 months time.

After 8 rounds, Roma is on the first place, 5 points clear of Napoli and Juventus. Rudi Garcia`s side has won all matches, with a 22-1 goal difference, including wins over rivals Inter and Napoli. Is Roma really so strong, or will they eventually come back to earth and concede the first place? What are the arguments for which Roma is playing so good and why are they set to win their first italian title since the 2000-2001 Serie A season?

The french manager is clearly a top guy in this profession, winning the Ligue 1 and the Coupe de France with Lille in 2010-2011. He reshaped this club and you can surely count on him to not be outsmarted by rival managers. Garcia provided top players like Gervinho or Totti with the positioning and morale they need to perform at their best level. 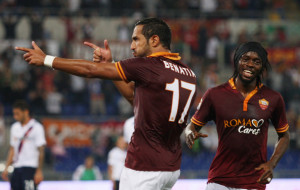 Roma had a brilliant transfer campaign in the off season, bringing in not only top players, but players which fit the needs of the team perfectly. Gervinho is playing the best football of his career under boss Garcia. Strootman is one of the most underrated players in european football, being one of the top 10 midfielders in the world in my opinion. Even Netherlands` boss van Gaal stated that, in a team full of superstars, his team is build around Strootman. Ljajic is having a breakout year and he could be on the verge of becoming a true top-class striker this season. Benatia became the leader of the top defense in Serie A and De Sanctis has already made Stekeelenburg`s departure forgotten. Maicon fills in the ex-vacant right-back role perfectly and other signings assure much needed depth. Florenzi has emerged as a superb goalscorer. The midfield is the most important asset of the team, and Roma is rock solid in this department. The Giallorossi can also count on the experience of Totti, De Rossi or Maicon in key moments of the season. The ideal team looks great:

Roma does not have to play European football this season, which will be a crucial factor for their fitness in latter stages of the season. Key aging players like De Sanctis, Maicon or Totti will also be able to be better prepared in the late winter and in the spring. Also, Roma has not been plagued by injuries so far and even though it`s early in the season, this is a good sign as it means the training regime does not make players susceptible to being hurt and the medical staff are doing their job. Considering this and the lack of european football, Roma has a good chance to stay relatively healthy until the end of the season. 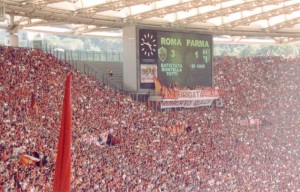 Roma is currently in unbelievable form and they have a string of 6 very accessible matches (Udinese, Chievo, Torino, Sassuolo, Cagliari, Atalanta). Nothing is set in stone in football, but they could take advantage of their form during this time and put even more distance between them and their title rivals. Also, the schedule is overall very balanced for them, and they will play Juventus at home in front of an electric Olimpico crowd in the second to last round. This could be a decisive factor if the title will be up for grabs until the latter stages of the season.

The level in the Serie A has clearly decreased in the last seasons. No team has the quality to compete against the top-class sides in Europe and if you look at the teams that could dethrone Roma this year, you have to remain largely unimpressed. The 5 point gap that Roma has in front of the 2nd placed team (Napoli) is already an important advantage.

Surely it is true that the current 3.50 price does not have the value of the odds offered in the start of the season, but what back then was an educated guess at most, now becomes a logical, fact driven investment. When you look at Juventus` odds of 2.00 to win the title, you have to feel that 3.50 for Roma is still very good value and if taken now, this investment could also soon provide sure bet possibilities – if Roma can keep up their form and take close to maximum points in the next few rounds where they have an easy schedule. All in all, it`s looking quite likely that Roma will get its 4th Serie A title and houses in Rome could well need some more space for Totti-Scudetto wall paintings at the end of the season.

Welcome!
Betdistrict is a betting tips website launched in 2013, after seven years of experience in the local market. We provide free tips, betting guides and all the betting information you need.
Free betting tips
We pride ourselves with our quality football and sports betting tips. Every preview on Betdistrict is satisfactory information-wise. Guaranteed!
Highly competent tipsters
'The best tipsters' is an overused and misused statement. We will only say that among us are former bookies, professional punters and former professional athletes. Experience, we got it!


Welcome!
Betdistrict is a betting tips website launched in May 2013, after seven years of grinding and gaining experience in the local market. We provide free tips, betting guides, bookmaker reviews and all the betting information you need. Stick around and you`ll likely find us to be a very good resource.
Free betting tips
We pride ourselves with our quality sports and football betting tips. Every pick, analysis and preview on Betdistrict aims to provide the best information for users.
Highly competent tipsters
'The best tipsters' is an overused and often misused statement. We will only say that among us are former bookies, acclaimed sports writers, professional punters and former professional athletes. That`s right: experience, we got it!